LCCA alumna Mary Martin was recently featured in the Belfast Telegraph following her creation of a dress inspired by the death of Cecil the lion in Zimbabwe back in 2015.

The dress is made of sparkly fabric and featuring layers of black tulle around the neck and shoulders, which represent the mane of the lion. The full interview can be found here.

Earlier this month, Mary Martin also took part in Glasgow Fashion Week, where she wore pink bows in her hair to honour the fight against cancer.

Yasmine Trendy, one of the fashion models in a pink dress, who’s currently undergoing cancer treatment, said: “It was a honour for me to wear one of Mary’s creations.” 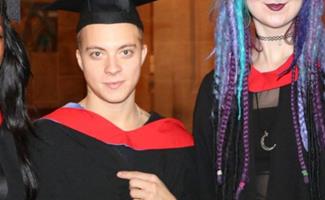